The  GP Stunt began in  2008, and is now the most important competition in the stunt world. Hundreds of drivers of all nationalities (Polish, French, American, Spanish, Finnish, Japanese, etc.) have participated throughout the years, each time pushing the boundaries further than what was thought possible with a motorcycle. The 2015 edition is no exception. Riders of all backgrounds, including a small army of highly motivated Japanese have engaged in an epic fight throughout the weekend.
Epic, not just the level of the riders, the highest ever, with several tricks that hadn’t been seen before were shown off during the competition along with some  incredible runs, especially from Martin “Korzen” Glowalcki the winner. But also because-this 2015 edition had further challenges: the   track which had been damaged  by the strong July sun left no room for  the slightest mistake and the riders found themselves in some of  the most difficult situations. Fearlessness was therefore a quality you had to have this year to make the top ten.
Some did not succeed, and there were many crashes this summers (see videocompilation of crashes FREEGUN STUNT GP 2015 here).
Four French  nevertheless managed to finish in the top ten, including Kevin “Kafon” Parussini of Switch Riders who finished 8th and Sarah Lezito who finished 9th after impressive runs, and Guillaume “Guyguy” Gleyo seventh andRomain Jeandrot 6th.
To see the complete rankings it’s here !

Fortunately, Freegun was there to refresh and pick up our riders with a pool!

the official video will be out soon on our official Freegun facebook page ! 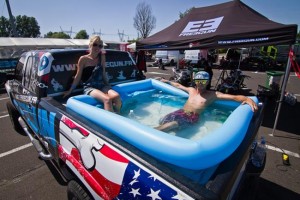